Two children are playing a scene. It takes place within a school, with one child playing the role of Teacher, currently telling off one of their students. In 15 seconds, a spaceship is going to crash through the roof piloted by one mad scientist and a talking Ape.

Our original actors have no idea that this will happen, but to the casual observer their reactions will seem planned and rehearsed. This is part of the essence of what we facilitate at Dragon Drama. The ability to think on one's feet and not merely DEAL with the unexpected but to welcome it with open arms and adapt accordingly. An ability that we’ve all had to call upon recently.


With such uncertain times ahead of us this ability to improvise and adapt to new realities has proven itself to be invaluable. As have stories. The stories of ordinary people going above and beyond to help those in their communities. The stories of song erupting from Italian windows and bouncing down empty streets. The story of a 100 year old man raising millions to fund the NHS by walking around his garden. These stories have helped us to see the community that still exists at the end of all this.


This is why we’re so glad that we’ve managed to find a way to get Dragon Drama online! A space to practice that skill of improvisation and adaptability whilst being immersed in stories seems like a good approach when faced with an uncertain future. Here’s a quote from Keith Johnstone, a practitioner who has deeply influenced our work at Dragon Drama: “There are people who prefer to say 'yes' and there are people who prefer to say 'no'. Those who say 'yes' are rewarded by the adventures they have. Those who say 'no' are rewarded by the safety they attain.”


In our current situation we do not have to choose between adventure and safety. Staying safe IS the adventure. An adventure we are all on together.


We will do all that we can do to keep the Dragon Drama flag flying; always thinking of new ways to practice that skill of improvisation and adaptability and always thinking of ways to tell our stories. This blog will be an opportunity to follow along the journey while we do! We’ll post things we find interesting, any updates that are happening in Dragon Drama and basically ANYTHING that we think might be useful to get through this time.


Because we will get through it. And what a story we’ll have to tell at the end.

Remembering John Gielgud, and being a little on the short side!
Neil Nisbet

Hello to everyone at this strange time! This storm shall pass.

From an early age I have always loved the theatre, either watching or performing. It all started with me directing plays with childhood friends in the garden til at the age of thirteen I started to act professionally, first on stage and then on the television. I loved the whole world of the theatre; the actors and actresses. In those days there were three great knights of the theatre: Sir Laurence Olivier, Sir Ralph Richardson and Sir John Gielgud. The latter I had the privilege to meet. Sir John was a friend of my Godfather and one day I was taken by my Godfather to have lunch with him. During a very good luncheon he talked of his life in the theatre as I listened attentively...


I remember him saying he had been keen to break in to the new school of acting in the fifties as he had been seen to be very much from the old school. He was in a play being directed by one of these 'new school chaps' called Peter Brook (The Empty Space) and had enjoyed the early days of rehearsals experimenting with the text. Then one day he panicked and said to the director and cast, “All this feeling the emotions has been fun but when will we start rehearsing the play? We open in a few weeks!”


My Godfather received a letter from Sir John a few days later which said that he had enjoyed meeting me and wished me all the success in my acting career, but thought that my shortness of stature may be a difficulty. Well! Little did he know that at that time my shortness of stature was getting me a lot of work as I looked younger than my years which meant I was being cast as teenagers both on stage and on TV, even though I was getting well in to my twenties! A lot of actors who are short of stature do very well. So to our littler Dragons, do not let that be a hinderance to any of you. Remember, Tom Cruise is not that tall at all. Here I am as a young(er) man! 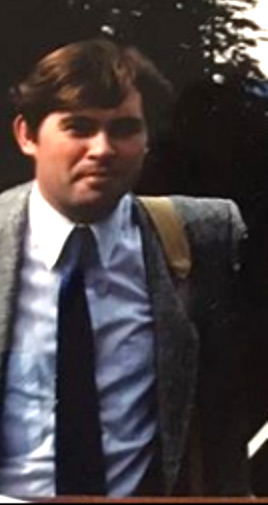 I leave you at this crazy time with a quote from my go to book at the moment. From ‘The Boy, the Mole, the Fox and the Horse’ by Charles Mackesy: 'When the big things feel out of control... focus on what you love right under your nose'